Crash Looking Forward and Back

At two and a half decades, Crash Ensemble now occupies the paradoxical age of a music group where your response is ‘25 already?’ and ‘Only 25?’ The group was formed when I was in my teens and just becoming aware of contemporary music, and as a result, in my mind, they’re a group who feel like both a permanent fixture on the Irish new music scene and a fresh and adventurous young ensemble.

To celebrate their birthday, Crash Ensemble staged a pair of concerts over the weekend, the first of which took place on Saturday evening the 3rd of December at the Studio in the National Concert Hall. They were joined on stage by soloists Neva Elliott and Iarla Ó Lionáird, as well as by their artist-in-residence, the violinist and composer Diamanda La Berge Dramm, who played in the ensemble, in performances of Crashed – for which she wrote music to accompany text by Elliott – and Donnacha Dennehy’s Grá agus Bás.

Crashed, for spoken word and ensemble (well, for Crash Ensemble specifically) was written to open the concert. Elliott recited her own text, drawn from her memories of a decade as CEO of the group, a position she left in 2021 to resume her practice as an artist. Above the performers was projected video, close-ups of gold jewellery, of smoke, of slowly shifting handwritten words.

The libretto sits somewhere between a narrative and an abstract poem, flitting from memory to memory like fragments of thought. At times we hear wry commentary on responses to the group (‘Always too loud, isn’t that what the critic says, writing for the daily paper?’). Other times, speaking to Crash directly, it uses the language of a love letter: ‘It was seeing you being all that you are, full of your language. / Let us say this us a romance, or if this not be too lofty a claim, I wrote this song for you.’

La Berge Dramm has been one of my favourite musical discoveries this year. That said, this is a highly narrative work and the music rarely dominates. Instead it shifts with the mood of the text: here a glimmering chord or passage for strings and percussion; there a sudden, striking chord for the whole group. And like the text and images, the mood itself is often elusive.

Given the subject matter, there was a danger of the work tipping over into self-indulgent nostalgia, which thankfully never happened (though it stood on the precipice a couple of times). The work was sentimental, an unabashed celebration. But after a quarter century, some celebration is justified. Crashed is by, for, and about Crash Ensemble; it’s the candles on the cake. 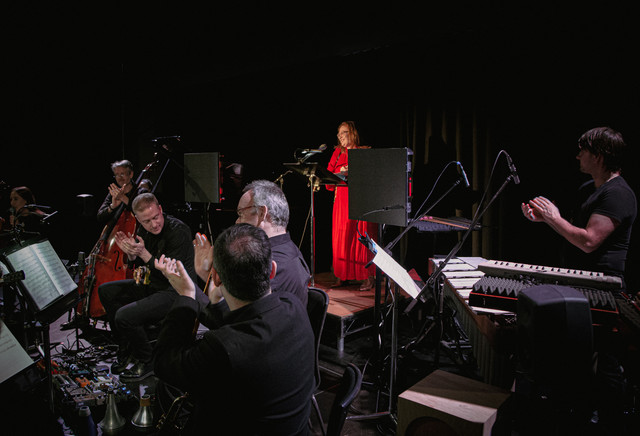 Moments of ecstasy
Written in 2007, Donnacha Dennehy’s Grá Agus Bás is still one of his most powerful and affecting works. Unrolling in an ebbing and flowing intensity over 26 minutes, the work’s genesis was a spectralist expansion of the singing of Iarla Ó Lionáird. The composer wrote the score around the singer’s voice, and around what he describes as ‘moments of ecstasy’ from a number of sean nós songs. With Dennehy’s taste for extremes of pitch, Ó Lionáird’s amplified mid-range voice becomes a focal point for the music on every entry.

I’ve often found that interpolating an Irish traditional timbre into a classical or contemporary context can have mixed results (although I’ve recently seen a number of performances that are leading me to reassess this viewpoint). One would think that would apply doubly to a style as iconoclastic as sean-nós singing, but in Ó Lionáird, Dennehy has a collaborator both sympathetic and virtuosic. Ó Lionáird of course is no stranger to ambitious and successful integrations of sean nós with other styles, and has worked with Dennehy a number of times. Grá agus Bás finds an excellent balance between Dennehy’s highly-charged instrumental sound and the slower, richly ornamented sean nós.

The effect is almost like a concerto, the singer a clear and distinct timbre amongst the ensemble, with soloist and group running like adjacent streams, occasionally intersecting (like when the trombone begins to double the vocal line, seeming to make the ethereal solid), other times fragmenting. Though the work has been released as a recording, the difference in live performance is a matter of intensity, the full force of the ensemble filling the space with pitch and reverberation. Why yes, it is loud.

At the podium, Ryan McAdams directed with bounding, generous energy, the group’s playing as sharp, clear, and precise as ever.

It’s surely deliberate that the two works performed were by La Berge Dramm, Crash’s current Artist-in-residence, and Dennehy, their co-founder. Just as deliberate, surely, is the commissioning of a new work that looks back at the group’s history and pairing it with a work from 2007 (Crash’s tenth birthday). It’s just two works, but it makes a programme that looks forward and back.

Brendan Finan is a teacher and writer. Visit www.brendanfinan.net. Music Alliance Ireland to Hold Public Meeting at Folk Conference in Monaghan
The Journal Of Music
Meeting will take place at the inaugural Your Roots are Showing conference on Monday 23 January at the Four Seasons Hotel. A Century of Irish Classics?
Barra Ó Séaghdha
On 7–25 September, the National Concert Hall hosted 'Composing the Island', a major series of concerts spanning one hundred years of Irish classical music. Featuring over 80 composers, 27 concerts, and almost 200 works, Barra Ó Séaghdha explores its achievements as well as the musical questions it raises.
Nov 13, 2016