The National Concert Hall has announced that soprano Kelli-Ann Masterson is the winner of the NCH Bernadette Greevy Bursary Award for 2022 and Irish/Welsh composer Anselm McDonnell has been awarded the Jerome Hynes Young Composer Award.

The NCH Bernadette Greevy Bursary Award honours the late Irish mezzo-soprano by awarding a singer a prize of €5,000 and a performance opportunity with the National Symphony Orchestra. Masterson – who is currently on tour with Irish National Opera in Donizetti’s Don Pasquale – was awarded the prize for her performance of ‘Tornami a Vagheggiar’ from Alcina by Handel, ‘Wer hat dies liedlein erdacht’ by Mahler and Ghost Apples by Irene Buckley.

Belfast-based composer Anselm McDonnell will receive a prize of €2,500 and will also be commissioned to compose a new work that will be premiered at the NCH in 2023. This year’s award was adjudicated by composers Emma O’Halloran and Andrew Synott.

Soprano Aimee Banks has been announced by the Royal Irish Academy of Music (RIAM) as the winner of the 2022 Irené Sandford Award for Singers. The award, which commemorates the singer and former Head of Vocal Studies at the RIAM, offers a bursary of €2,000.

Banks – who previously featured in Roger Doyle’s opera Heresy – competed in the final of the competition alongside sopranos Abbey McGiff (second place), Anastasia Sereda (third place) and Lauren McCann (fourth place). The Best Performance of a Polish Song during the semi-final round was awarded to Anastasia Sereda; Jacq Herbots received the Patricia Eberhart Aria Prize; and the Most Promising Performer award during the semi-final round went to Hugo O’Donnell. 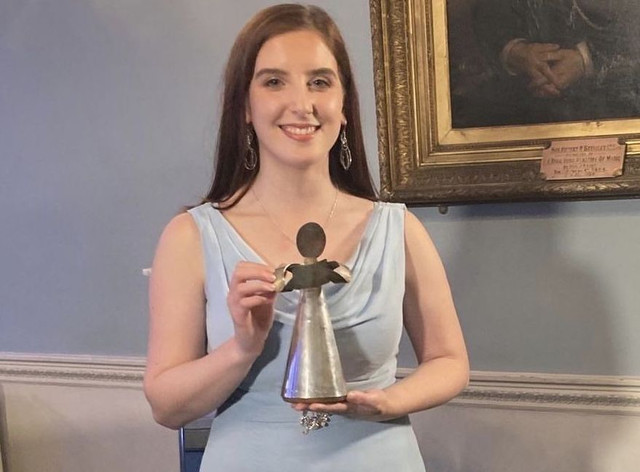 The Royal Irish Academy of Music has also announced that Deborah Kelleher, Director of the Academy, has been elected President of the Association of European Conservatoires (AEC) at their 2022 Annual Congress. AEC is the leading voice for Higher Music Education in Europe with 300 member institutions, all of whom are conservatoires of music and performing arts schools based around the world.

Kelleher is the first Irish person and the second woman to be elected to this position in the association’s 70-year history.

The Arts Council of Northern Ireland has announced the artists that have received funding as part of the Artist Career Enhancement Scheme (ACES). The awards are provided across the disciplines of music, visual arts, drama, literature, and dance and the funding total was £84,000. Among the recipients are drummer and educator Darren Beckett, composer James Thompson, composer, sound artist and curator Peter O’Doherty, and pianist, improviser, composer and educator Xenia Pestova Bennett. ACES is a professional development programme that provides funding to individual Northern Ireland-based emerging and mid-career artist artists, enabling them to create new work and develop their artistic careers.

Author, music writer and Journal of Music contributor Gareth Murphy has been nominated for a Grammy in the Best Album Notes category. The nomination is for his work on the classic Andy Irvine and Paul Brady album, originally released in 1976, and reissued in March of this year on the Compass Records label. The other albums nominated in the category include Astor Piazzolla – The American Clavé Recordings, Doc Watson – Life’s Work: A Retrospective, Harry Partch – Harry Partch, 1942, and Wilco – Yankee Hotel Foxtrot (20th Anniversary Super Deluxe Edition).

Murphy is author of Cowboys and Indies – The Epic History of the Record Industry and also ghost wrote Siren Song, Sire Records founder Seymour Stein’s official autobiography. He won Writer of the Year at the 2017 PPA Independent Publisher Awards for his music business articles in the UK press.

Dr Ailbhe Kenny, Senior Lecturer at Mary Immaculate College, has been awarded an Irish Research Council (IRC) Starting Laureate Award. Under the scheme, Dr Kenny has been awarded €400,000 to conduct a four-year project investigating the role music plays in intercultural school encounters with children and young people from an asylum seeking or refugee background. Dr Kenny is a Senior Lecturer and researcher within MIC’s Department of Arts Education & Physical Education (AEPE).

Violinist Daimee Ng has been announced as the winner of the 2022 Top Security Frank Maher Classical Music Awards, Ireland’s largest such competition for secondary school students. Ng – a sixth year student at High School, Rathgar, Dublin – won the top prize of €5,000 for her performances of Bach’s ‘Gavotte en Rondeau’ from Violin Partita No. 3, BWV 106, and Tchaikovsky’s ‘Valse-Scherzo in C Major, Op. 34.

The other five finalists, who each received a bursary of €300, were pianist Lucy Lele Byrne, guitarist Alexander Krylov, flautist Grace Mulcahy-O’Sullivan, cellist Elena O’Connor, and pianist Dawid Walega. Ng was selected as a winner by a judging panel including Dr Gerard Gillen, emeritus professor of music at NUI Maynooth; Dr Kerry Houston, head of academic studies at TU Dublin Conservatory of Music and Drama; and pianist Veronica McSwiney. 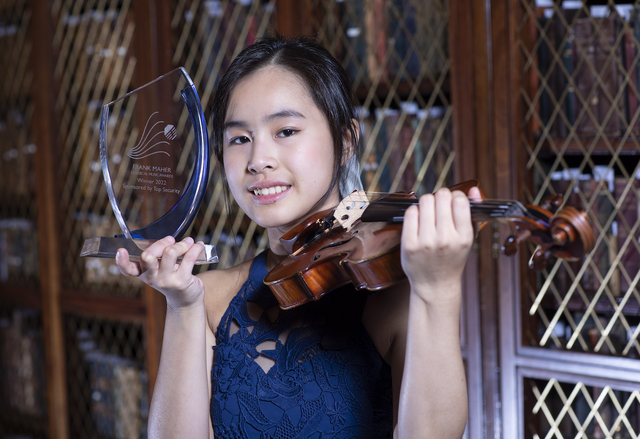 The Society of Musicology in Ireland has announced the recipient of this year’s Irish Research Council – Harrison Medal as musicologist Dr Ita Beausang.

The Harrison Medal was inaugurated in 2004 by the Society of Musicology in Ireland in honour of Frank Llewellyn Harrison (1905–1987), the Irish musicologist who made a seminal contribution to the study of medieval music and ethnomusicology.

The Medal is awarded by the President and Council of the SMI to recognise outstanding achievements and excellence in research in musicology. Dr Beausang was awarded the medal in recognition of her outstanding contribution to contextual studies of music in Ireland, from the late-eighteenth to the mid-twentieth century.

The NI Music Prize took place last month at Ulster Hall in Belfast with a number of awards presented on the night and performances by Horslips, SOAK, Dea Matrona, singer-songwriter Rory Nellis and more.

The Album of the Year award was presented to Robocobra Quartet for their record Living Isn’t Easy; Single of the Year went to indie-pop artist Ferna for ‘Wasting’; Belfast rock band Junk Drawer won Live Act of The Year and Video of The Year for ‘Railroad King’; and the BBC Introducing: ATL Artist of The Year award went to indie-alt band The Florentinas. Barry Devlin of Horslips received the Oh Yeah Legend Award; and Bekfast film and TV composer Sheridan Tongue was presented with the Outstanding Contribution to Music Award by PRS For Music. 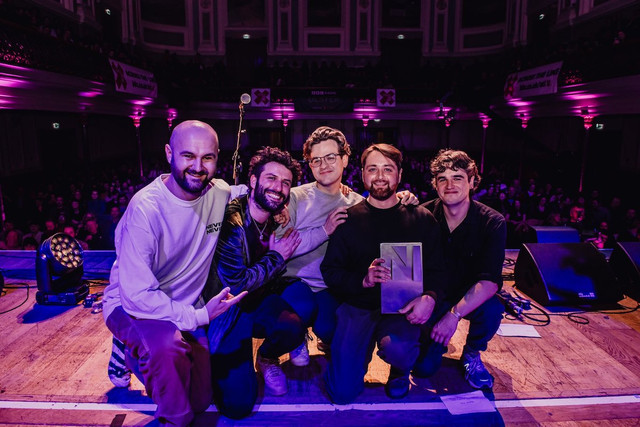 University of Galway last month presented button accordionist and composer Maírtín O’Connor with an Honorary Degree. O’Connor was announced as a recipient of the award in 2021, but the conferring ceremony was delayed due to the pandemic.

O’Connor is a renowned instrumentalist and composer, with vast experience in recording and touring. He has performed with bands including Reel Union, Dé Danann and Skylark as well as playing in the first Riverdance orchestra and having a significant career as a solo musician. 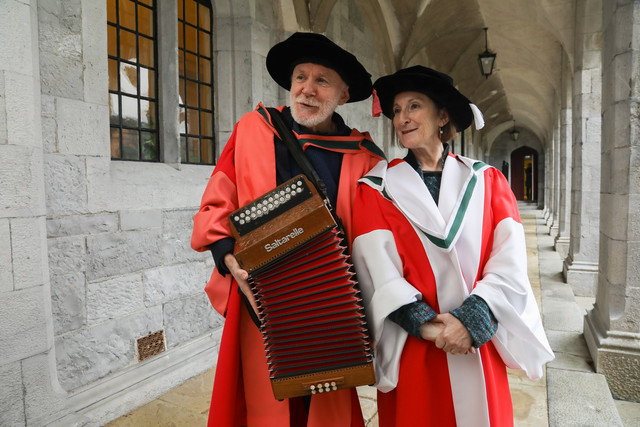 Máirtín O’Connor with poet Mary O’Malley at University of Galway in November.

Newpark Academy of Music has announced the appointment of Hilda Chan as the organisation’s new Director, following Grace Tallon who previously held the role. Chan joined the Academy earlier in the 2022/23 academic year.

She is a graduate of CIT Cork school of Music and the Kodály Institute of the Franz Liszt Academy in Hungary. During her degree in Cork, she specialised in choral and orchestral conducting under Conor Pasllier and James Taylor. She was also a candidate for NCH female conducting programme in 2017. 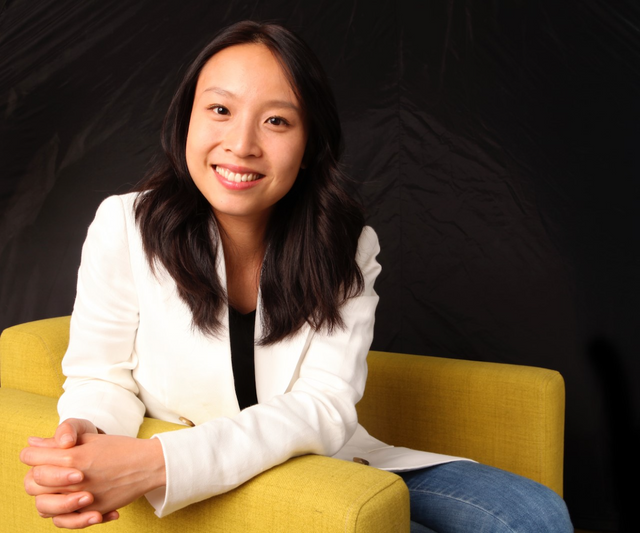 The Irish Association of Youth Orchestras has appointed Edel Carmody as Marketing and Communications Officer.

Carmody has worked in marketing with a number of arts organisations including Cyclone Rep Theatre Company, Cork Harbour Festival and Cork International Film Festival. She has also volunteered with First Fortnight, the mental health and arts festival. Carmody is passionate about making the arts inclusive and accessible to all people, especially young people.

As part of her new role, Carmody will work on a number of upcoming projects including the Festival of Youth Orchestras in February 2023.

In other recent news, Enda Scahill was awarded the Steve Martin Banjo Prize, the RTÉ Radio 1 Folk Awards were announced in November, and Bríd Ní Mhaoilchiaráin won Corn Uí Riada for a third time. For November appointments and awards in music, see here. Commemorating 1916 By Not Thinking About It
Barra Ó Séaghdha
As part of Ireland's 1916 commemorative programme, the National Concert Hall hosted a series of seven major concerts 'inspired by the 1916 Proclamation'. But, writes Barra Ó Séaghdha, did the series meaningfully engage with this history, or were they 'arranged with a view to demonstrating our harmlessness to an imaginary outsider'?
May 22, 2016 Saint Sister at the NCH
Ruth Cronin
Euphonic and empowering – Saint Sister's headline concert at the NCH was another major milestone for the duo, writes Ruth Cronin
Jun 22, 2017