The Brutality of Bureaucracy

On descending the steps into the crypt of Christ Church Cathedral in Dublin, the audience was confronted by a line of identically attired people who began to march on the spot. The bare surrounding walls and the stark lighting somehow brought Gustav Doré’s print of a prison yard to mind. The shuffling, stamping line then began to chant ‘Direct provision is like being in an abusive relationship.’ This was the dramatic opening of Evangelia Rigaki’s installation opera This Hostel Life (26 Sept.), which sets selected passages from Melatu Uche Okorie’s searing collection of short stories that illuminates scenes from the lives of migrant women.

Rigaki is interested in questioning or subverting the traditional attendance practice of opera audiences and in exploiting the tensions created when an audience is placed in close proximity with the performers, something that was also a feature of her previous opera The Pregnant Box. Appointed as a member of the Irish National Opera Studio, Rigaki was initially interested in exploring something to do with doors or transitions and it was the artistic director of INO Fergus Sheil who drew her attention to Okorie’s work after someone had serendipitously recommended the volume to him.

The work is scored for three singers, each accompanied by a single instrumentalist. Each duo, placed in different parts of the crypt, had three scenes to perform. The perambulating audience could stand by one performer and follow the work in a linear fashion or they could drift about the crypt sampling each performance. Pre-performance publicity stated one could enter and leave at any time, but in reality if one wished to see the entire work one had to stay for approximately an hour. Observing one performance, one could also by times hear parts of another scene taking place elsewhere, while the rhythmic chanting of New Dublin Voices was a constant in the background. As a result there were sudden moments when harmonically what was happening in one place clearly aligned with something elsewhere.

Two of the duos were placed quite close to each other and the beginning of each of one singer’s scenes dovetailed with the close of the other’s allowing one to drift back and forth between them seamlessly if one wanted to catch the entire of their performances in a linear fashion. Amy Ní Fhearraigh (soprano) and William Dowdall (flute) presented selections from ‘The Egg Broke’ which formed the nearest thing to a direct narrative, while Andrew Gavin (tenor) and Fintan Sutton (bass clarinet) had short shards of text from the story which gives the collection its title. Rachel Croash (soprano) and Richard O’Donnell (percussion) were at the opposite end of the crypt in a rather confined space amidst various display cases from the cathedral’s exhibition and they presented three passages from ‘Under the Awning’, two of which were performed without a pause between them.

Hostel experience
Rigaki’s approach to text setting varied, sometimes draping the words in angular lines, sometimes fragmenting sentences through lengthy passages of repetition such as Gavin’s repeated ‘Up and down, up and down [from morning till evening]’ which utilised an almost naive repetition of the words to mirror the tedium and frustration of the hostel experience. By contrast the lines could suddenly blossom into a more direct lyricism reflecting moments of warmth or to ensure that phrases such as ‘Nothing is better than when you decide something for yourself’ projected clearly to the audience. Sometimes the instrumentalists circled around the vocal line, sometimes there was imitation between vocalist and instrumentalist, of melodic ideas, sibilant noises, or in one section with Gavin and Sutton of a crazed hyperventilating. The amount of text which an audience member understood varied based on their proximity to the performer but also, as only short isolated passages from each story were set, depended on whether the audience member had read the Okorie stories beforehand; talking afterwards briefly with some people who had not read the stories, it was clear they only registered isolated phrases or general moods rather than narrative details.

Even if one didn’t know exactly what the context was, Rigaki provided a huge range of responses from the small forces for which the piece was composed. One could move from a beautiful dance-like scene for Ní Fhearraigh in which she told of how much she enjoyed being part of her husband’s family – the music of which was the only part of the score that seemed to carry an echo of African music in its repeated patterns – to a scene in which Gavin punctuated his account of direct provision with raw-sounding howling. Shuttling between these two performers provided the most powerful moments of the evening, the emotional content of their material amplified by the close proximity one had to the performances. Ní Fhearraigh’s blistering account of the search for her twins, during which she hammered at first with a soft mallet and then with a hard one on two tubular bells, was dynamically amplified by the surrounding hard surfaces and left one bruised by its immediacy. Gavin, who dealt with the most extreme vocal demands with panache, paced about like a caged animal, breaking into audience members’ personal space and singing or exhaling directly into their faces, bristling with a barely contained aggression caused by the brutal constraints of hostel life bureaucracy. 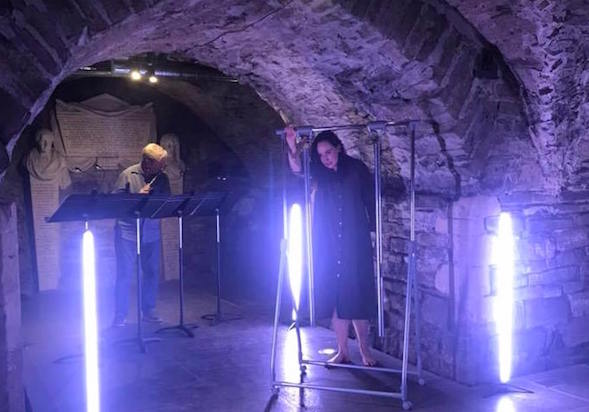 Croash’s first scene, contrasting the rain outside a Spar shop with her homeland, in which O’Donnell used various containers of water as well as more conventional instruments, provided a more extended lyrical interlude which suited her voice. However, surprisingly, her later scenes did not have the immediacy of the other performers’ work despite the fact that her third scene recounted racist incidents experienced in Ireland. This may have been partly due to the cramped setting in the exhibition space – from where I stood it was impossible to make out any of the text of the second scene delivered from behind a desk and the third scene was sung by Croash with her back to the majority of the audience – but it may also be due to the fact that unlike the other singers who performed from memory, she was reading from music, restricting her direct engagement with the audience.

Uneasy questions
Overall one came away impressed by how Rigaki has responded to Okorie’s work; however, the production did leave one with a number of uneasy questions. One could argue that the fact that the performers were all white Irish could be interpreted as a comment on the way people in direct provision, and those from lower socio-economic groups more generally, are locked out of the classical music world due to the hefty price tag that comes with years of specialised training. This profile, however, extended to all aspects of the team including director (Caitríona McLaughlin).

At a time when hotels designated for asylum seekers in Moville and Rooskey have been attacked by arsonists and just days after TD Noel Grealish’s racist comments about African migrants were widely broadcast, artistic representation of the problems faced by asylum seekers could not be more timely. One wonders why no consideration seems to be taken of creating a work with direct provision residents as has been done by several theatre companies such as Visionation, Witch Work Theatre Company, Longford Backstage Theatre or Tailtiu Theatre Company which recently appeared in the Abbey’s 5x5 development series. Instead, INO is currently developing a more safely middle-class project focused around the European Football Championship, their call for participants noting ‘Those interested in getting involved need no prior music experience, just an interest in football’. While one understands that Rigaki’s demanding solo work requires highly accomplished performers, the material given to New Dublin Voices did not require such a specialised team and something extremely similar if not identical could have been developed for a group of people who have experienced direct provision.

The fact that this work was only presented twice to limited audience numbers (for space reasons) and that there is no plan at present to bring the production outside Dublin, even though it requires so few performers and can be adapted to a great variety of spaces, gives the venture a feeling of tokenism or even virtue signalling on the part of the company. This can be contrasted with Donnacha Dennehy’s The Second Violinist (produced by INO’s direct predecessor Wide Open Opera) which was launched with five performances at the high-profile Galway International Arts Festival in 2017 followed by a further five performances at the Dublin Theatre Festival. Brian Irvine’s Least Like the Other was given five performances at the GIAF this year and is expected to tour again. If the company is serious about its commitment to studio composers and the need to address relevant themes that also reach out to audiences normally excluded from opera in Ireland, it should match the commitment of its performers by bringing this powerful work to a wider audience around the country.

Mark Fitzgerald is a Senior Lecturer at TU Dublin Conservatoire. Concerts & Festivals (14–20 November 2022)
The Journal Of Music
This week's concerts, festivals and job and funding deadlines from Monday to Sunday. Out of My Element
Dan Trueman
American composer and musician Dan Trueman reflects on the Irish music scene, and Dave Holden of I Draw Slow considers Trueman's album CrissCross, a recent collaboration with Brittany Haas.
Jul 25, 2012 The Past Inside the Present: The Ergodos Exploration of Time
Liam Cagney
The Ergodos aesthetic has been remarkably consistent over the years, writes Liam Cagney, yet four recent albums by composers Benedict Schlepper-Connolly, David Collier and Simon O'Connor, and singer Michelle O'Rourke, are an undoubted maturation of the label's vision.
Feb 10, 2017